Effective Aug. 1, all televisions in medical facilities in Minnesota are required to have their closed captioning on, thanks to a law authored by Rep. Brian Daniels, R-Faribault.

The bill, which was signed into law on May 22, was an effort from Daniels to address an issue brought to his attention by the deaf community in Faribault.

Assisting the deaf community is particularly important to Daniels, as his oldest son is hard of hearing. In 1996, Daniels and his family relocated to Faribault so his son could attend the Minnesota State Academy for the Deaf.

One story in particular stood out to Daniels as a reason why closed captioning should be required on waiting room televisions. A person in a group he was meeting with shared a story about a family who was sitting together in a hospital waiting room and not fully comprehending some chaos they saw on the television. That was the morning of Sept. 11, 2001.

“That’s how I got this thing started,” said Daniels of his motivations. “Whenever there is something important happening on the television, you can’t tell. You have to read what they are saying about it.”

The issue appeared to Daniels as a non-partisan, fixable situation, so he teamed up with Jerry Newton, DFL- Coon Rapids, to write the bill.

At first, there was some slight pushback on the original copy in the Minnesota House of Representatives. Daniels foresaw some issues in the language that opened hospitals up to lawsuits in the event that a waiting room patron was to switch the closed captioning off. In response, Daniels and Newton removed the penalties to the hospitals from the bill.

The law now states that if closed captioning is turned off by a patron or is otherwise disabled, hospital staff must restore it as soon as practically possible.

For hospitals like District One Hospital in Faribault, complying with the new law was easy to do starting Aug. 1.

District One has four waiting room televisions in its facility, some of which are automatically set up for closed captioning and others that have to be switched on manually. However the closed captioning is turned on, hospital staff has been directed to keep an eye on the screens to make sure they are in compliance with the new law.

Rhonda Mulder, quality and performance improvement manager at District One, said that she appreciates that closed captioning allows everyone to enjoy the television the same and is glad that it is helpful to the deaf community.

Overall, Daniels expressed his pleasure to again serve the deaf community in Faribault, saying, “I’m just so proud of it because it affects my family and so many people we know in the community.” 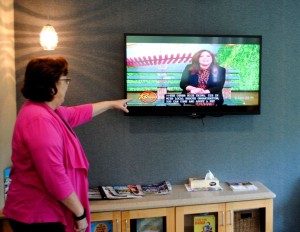 Rhonda Mulder, manager of quality and performance improvement at District One Hosp. shows closed captioning in effect in a waiting room at the Surgery Center (Gunnar Olson/Daily News)

« National Night Out
Check Out My New Radio Ad »